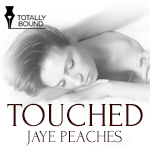 If you read Friday’s excerpt from Touched, you might have wanted to read on, so I’ve added a little more…

Tania complied as if he were plugged directly into her nervous system. It amazed her as she’d expected to be locked down with embarrassment.

“I’m going to massage your labia, buttocks and anus.”

“I understand,” whispered Tania, curling her fingers over the table edge.

“Then, as you requested, when you’re ready, I will begin an internal vaginal massage and stimulate your clitoris. Then I shall penetrate your anus and massage your sphincter muscle.” Adam lowered his head to her ear. “We’ve got over an hour and plenty of time for you to enjoy this and relax. If you want me to stop, you say stop and I will. If you want my assistant Lee to take over, you ask.”

If there was a place as divine as sensual heaven, Tania had gone to it. Adam worked magic on her flesh, teasing out her tension and releasing it, as if butterflies were flying out of their cocoons. There was no rush, as he from time to time simply rested his hands on her back and let her breathe out her stress. He slipped his smooth, oiled fingers inside her and drew her energy into a focal point.

Adam, with two fingers inserted in her soaked pussy, became trapped by the spasms and clenching. Then her breathing subsided and her body began to replenish. It had taken only twenty minutes to bring her to a climax. He hadn’t driven her there. She’d arrived at the destination as if she had carried a pile of stress and worries, depositing them all on the doorstep.