Why get spanked?  The reasons vary, but in Gemma’s world it generally is because she broke a rule.  Having rules to follow all day and every day is something new for her D/s relationship with husband, Jason. The previous Satspanks I shared her paddling, but what was the reason why she got paddled?

Gemma had been given clear instructions from Jason. Until he returned from his business trip, no hanky-panky and especially no touching herself.

Unfortunately, she took it upon herself to interpret the rule literally.

Stood before Jason’s desk in his study, consumed with guilt, she confesses. 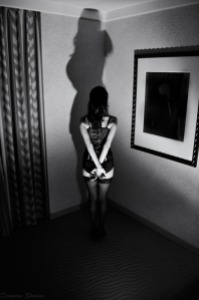 “Except…I didn’t use my hands.”

“Spit it out. I haven’t got all bloody evening.”

“Your desk. I apologise, Sir. I used the corner.” Blood rushed to her cheeks. Instinctively she took a step backwards. His face ignited with indignation.

“You humped this!” He slammed a fist on the surface. “My own desk! You’ve surpassed yourself.”

She gave him a small nod of acknowledgement. “Sorry,” she whispered.

“I…. Oh, for goodness sake, go stand in the corner.” He pointed to the other side of the room. “Keep your hands where I can see them.”

The cream-coloured wall filled her vision. Behind her, she heard him stab the keyboard.

“Is that nose touching the wall?” he barked.

She shuffled forward, and stuck out her nose, until her face was wedged into the corner. She hated corner time, and she was grateful he rarely used the humiliating reprimand.

Once he calms down, it’s OTK time!

(Oh, yes, a little longer than 8 sentences, but some are tiny…)

Excerpt from Chapter One –

“Gem! Gemma!” His voice inched into her preoccupied brain. “You stopped sucking ages ago. Where are you?”

Jason lifted her head off his semi-erect cock. Her drooling mouth was open and in position, but not active enough for him. She sighed and flopped onto her side next to his languishing form.

“Sorry. Miles away.” She rubbed her bleary eyes with her fingers, ashamed of her lack of attention.

“I guessed that much. Where? Still on Sublime? You need to disembark, darling: mentally and physically.”

She couldn’t adapt to the cooler air and goose bumps rose over her skin. He covered her with a sheet.

“No. Not there. Work, of all things. I read e-mails all yesterday afternoon, while you did yours. Wish I hadn’t.”