I’m back with the Nuthouse Scribblers for a SexySnippet. This a 7 sentence excerpt from Ruled by Him, which is about the life of Dominant businessman his submissive wife. Having moved into a 24/7 relationship, previously they had designated times or bedroom only D/s, Gemma has to adapt and quickly.

Jason has arrived home from work. He has instigated a rule – she must be ready for him. 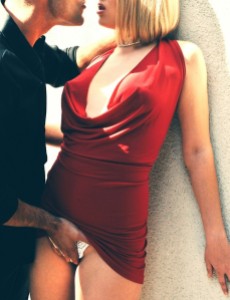 She greeted him in the hallway. One of his extra-special lingering kisses with her back pinned against the wall and it told her all she needed to know – he wanted her, no waiting around for the evening.

His fingers lifted her skirt. Finding her bare flesh, free of underwear, he stroked his fingertips along her wet slit. She gasped and banged the back of her head against the wall.

“I rule this, babe, don’t I?” The fingers crept into her slick pussy, finding little hindrance.

Ruled by Him is the second volume of Sublime Trust, however it can be read in isolation from the rest of the series, as each book has it own storyline.

8 thoughts on “#sexysnippet – The Greeting”