Alice is the subject of today’s post. A young, innocent woman who shouldn’t be out alone in town, and definitely not during Regency times when the regiment is visiting. 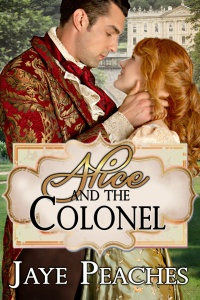 The woman’s raised voice stopped Alice in her tracks. Across the other side of the street, a small group of soldiers sat on benches outside a rather unwholesome tavern. Before them, remonstrating, was a plump serving maid. Stepping back into the dim shadows of an overhanging building, Alice watched as the young woman argued with a customer.

She wagged a finger at him. “You gave me a ha’penny, not a penny!”

“Do you accuse me of lying, wench?” He reached out and caught her skirts.

The soldier, with black hair and stubbly chin, tugged on the dress, pulling the woman closer. He smirked. “What shall I do lads? Take her over me knee?” His idea was greeted with a chorus of approval.

Alice’s lower jaw dropped. On the street! She covered her mouth with her hand. Yet, still, she could not move from the spot.

The serving girl tried to slap his hand away. They grappled briefly before he tossed her head first over his lap. She shrieked, twisting about but his strong left arm held her in place. Her red hair tumbled down, hiding her face and the hem of her dress rose up. Alice gaped in horror, as the soldier lifted up the barmaid’s dress and exposed her naked bottom to the street light.

Alice expected somebody to leap to the woman’s rescue, but the other men hooted raucously.

“A few hard slaps, go on,” egged one companion. “Teach her not to fib.”

“You brute!” The barmaid’s pale legs kicked up and down. “Let me go!”

The soldier raised his right hand and brought it down with a resounding smack.

His hand came down again. Alice jumped. The slap was easily audible across the street. She glanced up and down—not a window or door opened. Her heart thumped against her chest. Such unacceptable behaviour—to be spanked in public. She wondered if she should intervene, charge across the street and rescue the girl. How could she? She was suppose to be in town incognito. Moreover, how could she stand up against soldiers on her own?

She bit her lip. She should walk away; she knew it wasn’t her business. Something stopped her. Kept her in there, hidden. She didn’t mean to be a voyeur, but the spanking mesmerised her.

The girl had howled at first, then when the soldier gleefully landed his blows, raining them down like thunderbolts, she blustered an apology of sorts. “All right, you gave me a penny! Enough of it.”

Alice expected the spanking to end with the confession, but the soldier continued. His harsh smacks ended and instead, he slapped away merrily with lighter blows. She could clearly see her bottom turning rosy cheeked. Generously endowed with flesh, the rump quivered with each juddering smack.

Alice’s bosom heaved up and down as she wondered what it would feel like to be spanked so hard. Painful, it had to be. Yet, when the soldier paused to squeeze a buttock or even rub it down with a brisk buff of his palm, Alice thought she heard a whimper, or maybe, a strange sigh from the maid. Following a flurry of light spanks, the barmaid undoubtedly giggled. Wide-eyed Alice could not believe what she heard. The woman snickered again as she reached behind to try to cover her bottom.

“Be off with you. You’re done,” the soldier said.

She pushed up and the soldier released her. The barmaid brushed down her skirts, and her cheeks flushed bright red. “You soldiers, all the same. Like a bit of fun, don’t you?”

“So do you.” The soldier grinned and picked up his tankard. “Same again, please,” he asked almost sweetly.

It seemed to Alice, that the barmaid had relished her spanking. Alice shook her head slightly, as if to deny the image forming in her head—the vision of her own body laid across a man’s lap. Not possible. Nobody could enjoy such humiliation. She would refuse to countenance such a preposterous situation.

The barmaid swung her hips at the soldier and collected the tankard. As she reached the doorway, she turned to him. “It was a ha’penny.” She grinned and quickly scarped indoors.

– Excerpt taken from  Alice and the Colonel –  a Regency spanking romance story in which Alice discovers for herself what it is like to be spanked by a firm handed officer.

Want to know more about my latest books and other extras, then sign up for my Newsletter!

If you got a sec…. I’m considering doing my first audio book. Can you help me?

16 thoughts on “What Alice sees – #SpankAtoZ”