Welcome to the A-Z Spanking Challenge brought to you by Spanking Romance Reviews and Celeste Jones.

One of my favourite books to read to my kids is Slinky Malinky. A tale of a mischievous cat who goes out at night to collect things. When caught, there is retribution and the next night Slinky Malinky stays indoors.

Now, the S in this spanking story isn’t Slinky, but something else… spot it?

He punched the intercom button. “You better be in here—”

The door creaked ajar and she stuck her head around. Her long black hair tumbled down and she blinked at him. “Now?”

She slithered through the gap, closing the door behind her. He had to admire how she moved; always with elegance and a poise he’d rarely seen in another. The black hugger of a dress encapsulated her slinky curves, along with her long legs and swaying hips. She sashayed as she sauntered over to his desk.

“Now?” she repeated, her dark pupils widening. She halted just shy of the edge of his desk and flicked her cascading hair back over her shoulders with a delicate jab of her hand.

“We discussed this yesterday. The report was due, now it’s overdue by two days. Where is it, pet?”

She paced, swivelling on the balls of her high heels. “I had it planned out…then…I got distracted.” Halting in front of his desk, she inspect a long fingernail on her hand. She’d chipped another since he’d last seen her and she scowled.

“It’s always the same excuse, isn’t it? Something catches your eye and your off.” He despaired of her behaviour. She’d turned out to be nearly impossible to manage. They warned him, his friends, don’t take her on, they’d said.

She pouted, fluttering her long eyelashes. “I’ll do it tonight, first thing tomorrow, it’ll be here—”

“Too late.” He rose and walked around the desk. “We agreed, did we not?”

“Oh.” She inched backwards, sliding her heels along the floor.

She caught the lapel of his jacket with her finger. “I’ll be good.” She leaned into him and rubbed her forehead into his shoulder. “No trouble, promise,” she purred.

He groaned, feeling her warmth brush against his groin, antagonising him with her delicious scent. She trailed her hand down his tie, twisted a button on his suit, nimbly undoing the fastening. Any lower and she would—

“Enough, pet,” he snapped, breathless, easing her nuzzling head off his shoulder. How quickly she entwined her body around him, coiling her limbs about his. “The desk,” he ordered.

She sighed, a long drawn out, almost unnecessary exhalation. He understood her reticence, but it was no excuse for ignoring him. She bent over the edge of the desk, resting her weight on her elbows.

She mewled a huff and shuffled her feet closer to the desk, forcing her curvaceous arse up. Slowly, with unbridled relish, he raised her skirt up and over her globes, revealing her rounded cheeks. With a snap of the elastic, he lowered her black undies down her thighs to her knees. She locked her knees together. It didn’t matter, he could see everything he wanted to see.

“Six, that is what we agreed,” he reminded her.

“Yes… sir.” She wriggled her hips.

“Keep still.” He stroked her smooth buttock, feeling the silky soft skin beneath his fingertips. “Dammit,” he muttered. Perhaps he should never had employed her in his company. Clever, confident and somewhat bolshie, she roamed the corridors of the building, sinking her talons into the best projects, leaving her marks. She’d made an impression, shown her independent streak and generally, almost always, she delivered. Except, she couldn’t sit still at her desk and write one report.

In the evening, she curled up next to him, content and peaceful. She slept seemingly undisturbed and yet, she was capable of springing into action when he commanded her attention. Here, in his office, the centre of his territory, she fought back.

He drew back his hand, aimed and kissed it hard against her buttock. “One,” he declared.

She snatched a breath.

Another smack on the other cheek. “Two.”

She hissed out a long exhale and her fingers stretched out over the surface, the nails glinting under the lamp light.

“Three.” This time, his hand left an impression and he swept his arm back before delivering a purposeful, “Four.”

She clattered her heels on the floor.

She shot a glance over her shoulder, her eyes narrowed to slits, her teeth bared.

“Eyes forward,” he reprimanded. She obeyed.

He undid the top button of his shirt. The heat in the room seemed unbearable.  With a deep breath in, he exhaled and slapped her wondrous arse and at the same time, he uttered. “Six.”

He couldn’t resist giving her lithe form another soothing stroked and she pushed her bottom back at him, purring louder. Crouching down, he replaced her panties and drew down her skirt. With his hand hooked under her elbow, he helped her up.

There was no anger in her glowing eyes. Instead, she graciously offered an apology, which he accepted. She meekly rubbed against him, grinding herself into his hips. This time, he let her. She was tempting him, driving him to the inevitable conclusion.

She stared intently at the window. Her pitch pupils turned silvery as she focussed on something in the distance. 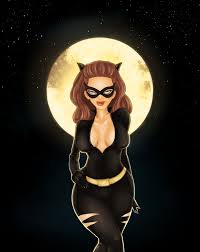 He’d lost her. With a sigh, he walked towards the window and opened it, just a few inches. It was all she needed.

“I’ll see you later.” He gestured outside and smiled.

She nodded, her eyes unblinking. Just before she shifted, she whispered, “leave the window open.”

By the time she reached the window sill, it was done. The last thing he saw were her pink back paws and tail slipping through the gap.

I’m not a dog person, so when I thought of writing a shifter story, I thought of my feline friends… hope you enjoyed it.

Want to know more about my latest books and other extras, then sign up for my Newsletter!

Please visit my Facebook page and give it a quick like and you’ll see my latest posts. Thank you!