Haughty duchess gets spanked by a wild man.

That was how this all began, my latest Regency spanking romance novel, a singular idea. It’s how many of my ideas begin. Mastering Meg was conjured up after a visit to the dentist. I just couldn’t get that chair out of my head and what it might be like to be spanked over it. Bound by Her Promise, my sci-fi story, grew from an idea of a society where spanking is an acceptable form of discipline in marriage and an independent woman is going to fight back.

So for Sophia and the Duke I needed a suitable backstory for Nathanial, the new Duke of Brockenhurst. Here in the UK, we don’t have the rugged mountain man. There are no great expanses of wilderness to roam and live in isolation. Convienently, in Regency times, Canada met the criteria for locating my mountain man and I cast my hero as a fur trapper.

For eight years he had trekked throughout Quebec and around the Great Lakes, until no one considered him a gentleman of noble birth, nor would they know he’d been educated by private tutor or given every opportunity to take up his father’s estates and live in comfort. Instead, he had abandoned that life, grown a beard, made his clothes from the hides of animals he trapped, prepared his own food, and built shelters from felled trees.

When Nathanial unexpectedly returns to England to inherit his cousin’s title, he knows of the exist of the widowed duchess, but they’ve never met.  Sophia, having completed her period of mourning, continues to live in her late husband’s palatial house. She knows the new heir has been found in Canada.

Here’s their first encounter, and continues Sophia’s tendency to have rather unfortunate misunderstandings about status….

The door creaked and she glanced over her shoulders. The servants should knock before entering but she’d not heard the gentle rap. The man who entered her private sitting room stared at her for a second, then rather than making a quick exit, he strolled farther into the room, letting the door close behind him.

Sophia lost her tongue, so flabbergasted was she by his abruptness and she clutched the scissors, holding them poised, ready to snip at a stem of a tulip.

“I guess I’m not in the right room,” he added with a soft grin. He’d spoken with a familiar, if subtle, accent.

He wore the clothes of a gentleman, but they were tatty and grubby in places. She sniffed and she caught the waft of saltiness and… fish? Was he a fisherman?

To add to his rough finish, he had long hair tied back into a ponytail and his cravat had unravelled to the extent the cloth hung loose and dangled next to his jacket buttons, of which one was missing. His knee-high boots were scuffed and would need a thorough polish to bring them back to any worthy state. She couldn’t help noticing he possessed a striking length of leg. The longer she stared in disbelief, the more she dwelt on his dimensions. Not a big man or overly endowed about the waist, as Percy had been, instead he had a tapering torso, the kind that became broad about the shoulders and narrowed to the waistline. His upper arms had brawn—she easily discerned the attribute through his bulging coat sleeves.

His face possessed a suntanned, weathered finish, and his blue eyes—the kind that dazzled from one of end of the room to the other—shone brightly. A pity such handsomeness had to be shoddily clad. Nevertheless, she needed to bring her emerging, and much neglected, emotions under control and deal with the intruder appropriately.

She stirred from her frozen position, put down the scissors and, dredging up the necessary courtesy, she addressed the man. “I’ve no idea what you think you are doing, but callers are requested to keep to the lower floors.” Sophia would have words with Mrs. Debden, the housekeeper. It wasn’t unusual for the odd caller to request a tour of the house and when she had been absent at her grandmother’s, many would have taken advantage to visit the esteemed property. However, she wouldn’t tolerate anyone in the house without escort. “Only the ballroom, library, gallery, and orangery are open to the public at this time and we prefer appointments only.”

“That is perfectly acceptable, but I am not a caller; what I’m after is a bath. Is it this way?” He pointed to the other door, which led to the next room.

The man must be mad and had wandered into the house. “I shall ring for assistance.” While fighting a rising sense of panic that she was in the presence of a thief or vagabond, she moved towards the bell pull next to the fireplace.

“You don’t know where the master chamber is?” He furrowed his eyebrows, forming lines in his forehead. “How odd. Are you new here?”

“New?” Sophia exclaimed. “I’ve been back these past six weeks.”

The stranger scratched his chin, then his scalp. “I’ll just go this way.”

His scratching unnerved her. “Heavens, you don’t have fleas, do you?” She stepped backwards, reaching out for the bell pull.

“Fleas!” he laughed. “I should bloody well hope not. But there were rats on the ship, as there always are. I did bathe regularly, but saltwater is not the same as a hot bath before a roasting fire, is it not? I was told it would be drawn and ready by now. Damn, it’s been a while since I visited Attingham. I’m quite lost.”

“You’ve been here before?”

“Years ago, as a boy. My parents brought me for a visit.”

“And now you’re back for a bath?” The man surely needed to be in bedlam, tied to a bed and fed laudanum for his madness.

“Just that for now, although I’m quite hungry and wouldn’t mind a juicy steak. Could you order one for me?” He had nearly reached the other door and she gave the cord a swift yank. “Good girl, thanks.”

“Wait!” She couldn’t have him disappearing further into the house, stealing and looting, or worse, he might climb into a bed and go to sleep. She was sure she’d heard that had happened somewhere. “Um, do stay and let me have you escorted. A footman will be here shortly.”

“A valet might be better since I need to… so…” He halted, then chuckled for a moment. “Sorry, you’re not the housekeeper, are you? Far too young. A maid? No—” he shook his head, “—that dress is too fine. I guess, you’re a lady who arranges the flowers—is there a title for such a post? I have to say, all the vases are well stocked and quite beautifully adorned with the freshest posies. I should congratulate you.”

Sophia planted her hands on her hips; she’d had enough of his derogatory comments. “I am—”

The door opened and a footman appeared. Sophia watched as he faced not her, but the ruffian and bowed to him. “Your grace.”

The man shook his head again; puffing out his lips, he muttered, “I really need to speak to Tom about this pompous—”

Sophia stamped her foot. “I’m over here!” she shrieked. “Have you gone blind, Turner?”

“Apologies, your grace, but—”

“Your grace?” The jolt was visible in his whole body. The strange man straightened, glancing back and forth between the footman and Sophia, his eyes darting, narrowing to slits. He leaned towards Turner. “She’s the duchess? I thought she would be older.”

Turner’s cheeks had gone crimson. “I… How can I be of assistance, your grace?” He directed his question to the man, not her.

Sophia swallowed hard. “You said a ship. You’ve been on a ship.” The isolated remark now made sense. He had come from overseas, which meant…

“Yes. Now, I understand,” said the gentleman with the ponytail and he relaxed his shoulders. “I do appear quite beneath my station, don’t I? My fault. I insisted I be brought straight here and had no opportunity to change my apparel—not that I possess anything better than this. I do apologise for my smell, it is most unfortunate and my hair will be cut, but not with those scissors.” He pointed at the shears on the table.

“Once removed. We share a grandfather or great-grandfather, something like that. I arrived this morning at Portsmouth.”

Her mouth formed a round ‘O’ and, finding her manners, she curtsied.

“Ah, please, don’t do that. We are family. You must be Caroline—”

“Caroline!” Sophia sprung up from her diminished pose. “I am Sophia.” 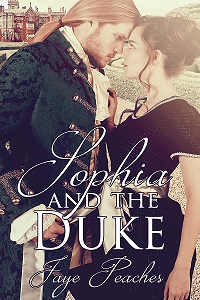 After the passing of her husband, the elderly Duke of Brockenhurst, twenty-two-year-old Sophia chafes at her family’s expectations during her lengthy mourning period. When she is free to re-emerge in society at last, at her grandmother’s insistence she entertains the courtship of Nathaniel Hartwell, a distant cousin of the old duke and the man next in line for the title.

To her shock, Sophia learns that Nathaniel has spent the last eight years living as a trapper and fur trader in the mountains of Canada, isolating himself from the world after the tragic death of the woman he loved. Though he is a rough, uncivilised man, his devilishly handsome looks and commanding presence excite her in a way nothing ever has before.

Sophia sets out to transform the new duke into someone suitable for polite society, but when her comments become disrespectful and mocking Nathaniel takes issue with her behaviour. Almost before she knows it, she is over his lap and her aristocratic bottom has been bared for a sound spanking.

Knowing that it is the right choice for all concerned, Nathaniel asks her to be his wife, but despite the fact that their marriage begins as one of convenience he is determined to show Sophia the intense pleasure a strong man’s dominant lovemaking can bring her. Though her spoiled attitude occasionally earns her a bright red, well-spanked bottom, as the weeks pass her desire for him grows ever stronger. But can love truly bridge the gulf between people from such different worlds?

Read an extended excerpt over at Stormy Night – Over his Knee

2 thoughts on “New Release – Sophia and the Duke”