Welcome to Wednesday’s WipItUp – a showcase for works in progress or recently published. I think this counts as recently published after one week out. Sophia and the Duke is knocking about in the top Historical Erotica bestsellers on Amazon, which is a good way to end the summer for me.

I’m watching the nights draw in already and thinking about how to spend the evenings…writing of course. Sophia, my heroine, likes to dance. She and her fiance, the new duke of Brockenhurst, are hosting a ball to celebrate their betrothal. She’s been giving Nathanial refresher classes in dancing, since he’s a little rusty having lived as a colonial fur trapper for a few years.

Nathanial moved about the floor with confidence, keeping on the balls of his feet as she instructed and nimbly hopping when required. He’d quickly learnt the dances and had a good memory. An excellent one, indeed, and she admired his thoughtful expression. Now and again, he glanced over to her and winked. The minor display of informality sent waves of tiny shivers across her shoulders and down her back. She squirmed on her toes, trying to send them away, but it was futile. Just the mere look of his blue eyes could conjure up delightful sensations.

“Are you in good health?” enquired Eloise, who came to stand by her side.

“The duke is most handsome. You’re very lucky to be able to snatch him up. Quite an achievement to marry the duke of Brockenhurst twice,” Eloise sniggered.

“He’s nothing like Percy, though. I feel like I’m starting afresh as the duchess, as if the first time was nought but a trial.”

“Mmm, Nathanial is certainly sprightly on his feet,” Eloise murmured, flicking open her own fan. “Do you think he’d dance with me?”

“Ooh,” squealed Eloise. “I think I will. He does have fine legs, doesn’t he?”

Sophia couldn’t answer. She locked in on Nathanial. His muscular legs filled out his trousers, his shoulders exemplified power and strength, while his hands showed capability and surprising dexterity. She murmured softly, a gentle purr of contentment. She wanted to see him undressed.

Regency romance – can love bridge the gap between a duchess and her colonial husband? 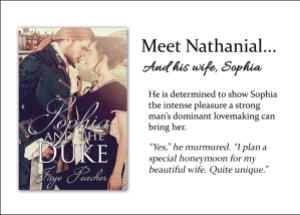 After the passing of her husband, the elderly Duke of Brockenhurst, twenty-two-year-old Sophia chafes at her family’s expectations during her lengthy mourning period. When she is free to re-emerge in society at last, at her grandmother’s insistence she entertains the courtship of Nathaniel Hartwell, a distant cousin of the old duke and the man next in line for the title.

To her shock, Sophia learns that Nathaniel has spent the last eight years living as a trapper and fur trader in the mountains of Canada, isolating himself from the world after the tragic death of the woman he loved. Though he is a rough, uncivilised man, his devilishly handsome looks and commanding presence excite her in a way nothing ever has before.

Sophia sets out to transform the new duke into someone suitable for polite society, but when her comments become disrespectful and mocking Nathaniel takes issue with her behaviour. Almost before she knows it, she is over his lap and her aristocratic bottom has been bared for a sound spanking.

Knowing that it is the right choice for all concerned, Nathaniel asks her to be his wife, but despite the fact that their marriage begins as one of convenience he is determined to show Sophia the intense pleasure a strong man’s dominant lovemaking can bring her. Though her spoiled attitude occasionally earns her a bright red, well-spanked bottom, as the weeks pass her desire for him grows ever stronger. But can love truly bridge the gulf between people from such different worlds?

This book is very well written, offering not only good complex characters but a particularly honest and captivating look at relationship evolvement. Most definitely hot sex and D/s are at the core of the chemistry between Nathaniel and Sophia. The reader is allowed to see how true commitment, as well as, shifting and balance of power affects the union. Beyond the story of the couple are the elements of England following the French Revolution and a tantalizing element from the New World frontier. The story pulled me into it, as I really had not initially expected

6 thoughts on “#WipitUp – Watching him dance”