I’m delighted to have author Kelly Dawson visit my blog today. Kelly is a fan of Westerns and has brought along an excerpt from her new spanking romance – Ways of the West.

Kelly has been answering some questions….

Parts of me are, yes. Both mostly, my heroines are a mix of myself, people I know, and the completely made-up.

How many books have you written? Are they all spanking fiction?

I have 3 books published now, heaps that are in various stages of progress, and heaps more ideas swirling around in my head. No, they’re not all spanking fiction, but they’re all romance. Although it will be a while before something that isn’t spanking fiction will be published.

Do you have a specific writing style?

I thought I did, but it turns out that no, I don’t. The way I write, the topics I choose … they’re constantly changing and developing. That’s a good thing, right?

Do you see writing as a career?

Absolutely! It doesn’t pay very much yet, but I’m hopeful that it will, one day. Being a writer is what I’ve always wanted to do, so this opportunity is a dream come true for me.

What is the best thing you have done in your life?

Marrying my wonderful husband and having my 4 beautiful children. They are what makes my life worth living.

Tell us about a unique or quirky habit of yours

I have Tourette’s Syndrome. So while the strange things I do aren’t exactly habits, it looks like they are. Other than my visible tics, I have to peg all my washing on the line using colour-co-ordinated pegs, and things must be hung up a certain way. If anyone helps me hang out the washing it drives me insane, because I’m going along after them, “fixing” it all LOL.

Have you ever had the feeling you were being watched?

All the time! Not so much since we’ve been in this house, but I swear a previous house we lived in was haunted. I felt like there was always something looking over my shoulder. It was horrid!

What’s your favorite material object that you already own?

My laptop. I would be lost without it.

If you could eliminate one thing from your daily schedule, what would it be and why?

Jessica was enjoying watching the shocked, but delighted, expression on Johnny’s face as she stepped out of the borrowed dress to reveal short, sexy drawers that had been the height of fashion back home in Boston, but which were still considered scandalous among decent company. She left the gown and petticoats in a puddle on the floor at her feet and shimmied out of her undergarments, standing completely naked before him in the dim glow cast by the lantern on the table by the bed. She’d never been naked in front of a man before but the excitement of the wedding was making her brave.

Johnny whistled softly through his teeth, stepping forward to place his hands gently on her waist, drawing her into him. “You are beautiful,” he whispered into her hair.

Jessica’s hands went to the front of Johnny’s pants where she urgently fumbled with the buttons with clumsy fingers. She wanted him naked, too. Groaning in frustration at the tight buttons that wouldn’t come undone, she moved her fingers to his chest, undoing his shirt instead. These buttons opened easily and she trailed her fingers inside his shirt, along the hard muscles of his chest. Pushing the shirt back off his shoulders she brushed her lips against the light smattering of hair she found there, pulling his shirt off completely and discarding it carelessly on top of her own pile of clothing.

“Here, let me,” Johnny murmured, brushing her hands away from his jeans, undoing them for her. She gasped when his erection sprang free, then reached out to touch it gingerly. 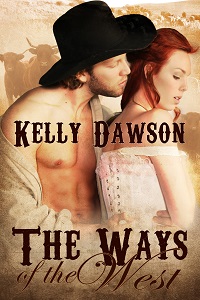 Orphaned by an attack on her family’s wagon train, Jessica finds herself stranded a thousand miles from Boston, the only home she has ever known. Only one man—a rough, dusty cowboy named Johnny—stands between her and the perils of the west, and he quickly makes it clear that he is ready to do whatever needs to be done to keep Jessica safe, whether she likes it or not.

When the unlikely pair stumble upon a cattle drive and they are both offered employment, Johnny doesn’t hesitate to accept. But after Jessica loudly expresses her disdain for his plan and for cowboys in general, Johnny decides it is time for drastic action. After a hard, embarrassing spanking followed by a tearful apology to the trail boss, Jessica is left with a sore backside and a strange yet undeniably powerful need to be held close and comforted by her handsome protector.

With Johnny by her side—and claiming an ever bigger place in her heart with each passing day—Jessica begins to adjust to life on the trail. But a cattle drive is a dangerous place for anyone, let alone a city girl with a penchant for disobedience. If he ever wants the chance to make Jessica his wife, Johnny knows he’s going to have to take her firmly in hand before she gets herself hurt or killed. Even if it means a painful, humiliating bare-bottom strapping she’ll never forget, one way or another he’ll teach her the ways of the west.

Author Bio:  Kelly Dawson loves anything to do with horses, rodeos and cowboys, and loves to get lost in a good book – preferably a rural romance where a strong woman falls in love with a ruggedly-handsome, tough but gentle cowboy, and these are the types of characters who feature in the stories she writes. Only in Kelly’s books, the cowboys are even better because they spank!
She lives literally at the bottom of the world in the South Island of New Zealand, with her husband, four kids, a dog and a cat.

4 thoughts on “Ways of the West – meet Kelly Dawson”