I’ve a special guest today and she’s sharing a tantalising snippet from her new release – please welcome Rachel to my blog.

Hello, I’m Rachel de Vine, and Jaye Peaches has kindly invited me to her blog to tell you about my new Book, That Day At The Lake, which is due to be published on November 11.  Let me tell you a little about the book. 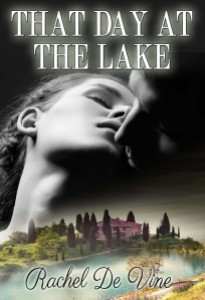 Adriana has adored Luca since his father rescued her from an abusive man in Naples, Italy, when she was just eight years old.  Her one wish when she was growing up was that Luca would fall in love with her and that they would marry.  However, life is never as simple as that.  Luca’s father is a Mafia member, and is killed by a gang member, and the two children are torn apart, seemingly forever.

Adriana takes matters into her own hands, and visits a BDSM club to try to persuade Luca to see her in a different light.  He capitulates, and some hot, sexy activity takes place between them.  However, just as their relationship is beginning, Luca’s criminal past catches up with him, and he finds himself in trouble with the law, due to a jealous gangster turning on him.  He goes back to Italy to solve his problems, followed by Adriana.  But there they face great danger, with the possibility of not only going to jail, but of losing their lives.  Adriana and Luca have survived their early life traumas, but was this threat one that will prove fatal to them both?  Will fate for once be kind to them and allow them to be reunited once more?

Here is a short extract from the book:

When we arrived back at my apartment, and she took off her coat, I thought again how amazing she looked.  Now she didn’t even have the protection, albeit miniscule protection, of a pair of panties, given that I had ripped them from her, and my cock hardened again.  She smiled at me.

“I hope you are not going to make me go home in the morning dressed like this.  That really would be a walk of shame.”

I leaned against the back of the couch, my arms crossed, slowly taking in the view before me.

“You know, you really deserve a thorough spanking, going out dressed like that.”

“Well then you had better give me one.  Spank me Luca.”

Join Adriana and Luca for an epic and exciting rollercoaster as they try to overcome the problems that life has thrown at them, looking for their happy ever after.

Find out more about my book on my website http://racheldevineuk.wix.com/rachel-de-vine where buy links will be posted when known.

Thank you so much Jaye for hosting me today.

1 thought on “That Day at the Lake – Rachel de Vine”