Protected by the Scotsman 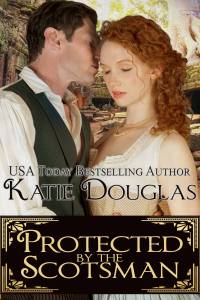 The last thing twenty-four-year-old Bobbie Huntingon-Smythe wants is to get married and settle down, so she is none too pleased when her wealthy parents send soldier-turned-bodyguard Sean McClintock to bring her home from her latest archeological expedition. To make matters worse, when Bobbie refuses to come with him willingly Sean merely takes her over his knee for a painful, embarrassing spanking and then puts her in the corner like a naughty little girl.

Despite her fury at being chastised in such a shameful manner, Bobbie cannot help being intensely aroused by the rugged, handsome Scotsman’s stern dominance. Even Sean’s belt applied to the beautiful, headstrong girl’s bare bottom proves insufficient to deter her for long, however, and soon she has snuck off on yet another risky adventure with him in hot pursuit. But when he catches her, will he end up returning her to her family or claiming her for himself?

Publisher’s Note: Protected by the Scotsman is a stand-alone novel which is the second in the Stern Scotsmen series. It includes spankings and sexual scenes. If such material offends you, please don’t buy this book.

“I say,” she began, forcing her voice to sound fine. “I’m sorry I hit you with the book.” He paused.
“And what else?” he asked.
She thought for a moment, then added, “And for calling your mother the daughter of an unwashed Visigoth.”
“And what else?” His voice was stirring something inside her, and combined with the pain from the spanking, she was struggling to concentrate.
She paused. “That’s all, isn’t it?”
“What about your elbow?”
“Oh, no, you completely deserved that.” She didn’t even hesitate in making her feelings known.
He resumed spanking her in a rapid-fire movement that left her gasping for breath and clawing at the floor of the train compartment. “All right! All right! I give!”

“And what else?” he prompted.

“And… for trying to elbow you in the trousers.” She tried to be earnest but really, she did think he had it coming. After all, he seemed to think he ought to stop her from travelling the world in search of interesting ancient sites, and that simply wasn’t reasonable. Who cared if she was a girl? She could wrangle the past as well as any man. She didn’t need protecting.

“I’m not convinced you’ve learned your lesson. Stand beside the window and hold your skirt up,” he told her.

Bobbie stared at him. “Are you serious?”
“I never joke about such things. You’d do well to remember that. Now do as you’re told.” She shook her head adamantly. “I shan’t expose myself for your merriment. I thought you were here to protect me. Nobody else on this train is trying to make me do anything untoward, so if you truly want to keep me safe, leave my compartment before I throw you out!” she retorted hotly.

“I won’t do anything. Yet. But you’re going to do it,” he told her.
She shook her head again. “Why would I?”
“Because I dare you to.” His eyes flashed as he spoke. Bobbie’s face grew hot as she realized she was cornered. He’d got her number good and proper. She pursed her lips so hard that she was quickly making a face like she’d been sucking a lemon. Bobbie trudged to the corner with an air of dejection, then lifted her skirt up.

“That was jolly unsporting of you, to dare me to do it,” she told him.

“I had a theory that you were the sort of girl who would do anything for a dare,” he explained. “And it seems that I was right.”

She looked over her shoulder and narrowed her eyes. “You’re looking,” she accused.

“I never said I wouldn’t admire the view.” He had a strange expression on his face, and Bobbie almost thought he was amused and trying to hide it, but what on earth was funny about spanking someone and making them stand in a corner like this?

Katie Douglas is a number one and USA Today bestselling British author of romance and erotica. Katie is an incorrigible romantic and her books reflect that. Especially the incorrigible part. In her spare time she likes to run headfirst into impossible projects, especially if those projects involve travel and good food. Her other love is shoe shopping. If you want to find her, look for the nearest natural disaster. She’s probably in the Starbucks closest to it.

1 thought on “Protected by the Scotsman by Katie Douglas”