Gemma – a millionaire’s wife and a Dominant’s submissive. One public persona, the other very private. Her personal journey takes her to many places physically, mentally, and most definitely kinky. She must continually put her faith in her husband and cast aside her turbulent past.

Whatever Jason’s rules and judgements might bring to their relationship, he will always cherish her. 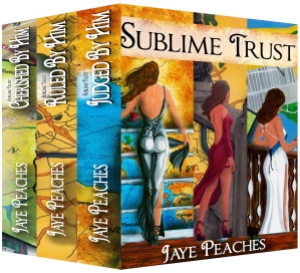 Three weeks cruising the Mediterranean Sea in a luxury yacht with her husband takes submissive Gemma into an opulent world she never could have envisioned before she met Jason Lucas.

A voyage to locations across Southern Europe and opens up new arenas of kinky sex for Gemma as her Dominant lover continues to educate her sexual being.

Unknown to the couple, several members of the crew are not who they appear to be. Both Gemma and Jason Lucas’s lives will be turned upside down by their disclosures and Gemma’s submission to her Dominant will be tested.

I loved it from start to finish. Judged By Him is an excellent portrayal of a husband and wife in a D/s relationship. This part of Gemma and Jason’s story takes us on vacation with them. A three month cruise where Gemma becomes her husband’s full-time submissive (instead of being relegated to specific play times). As the story progresses, you get to be a witness to Gemma struggling with her own needs and submissive desires as Jason continuously pushes her limits. As always, Jaye’s sex scenes are hot and more than a few of them had me squirming in my seat! A series of events toward the end of the story test Gemma and Jason’s relationship dynamic as well as their allegiance to each other. I fell in love with Jason’s steady dominance and it’s easy to see why Gemma loves him so much. Gemma had me from the beginning, her insecurities and internal battles make her easily relatable.

Another excellent story from this author. I love the continuing story of Jason & Gemma from the previous two Trust Me books. Ms Peaches is on my automatic buy list. You can read as a stand alone story but personally I enjoyed having the back story of their relationship.

Here, we meet Gemma and Jason, a married couple who are also Master & slave, Dominant & submissive. The entire action takes place on Jason’s yacht, as they cruise the Mediterranean for three whole weeks. Jason wants to expand Gemma’s sub/slave education, & so he brings new people, instruments, & experiences that are intended to teach Gem more about their lifestyle. With all the sex & other sexual activities on board, it’s a wonder either of them can walk, let alone sightsee or go to the opera.

There is a monumental heroine’s journey here, as Gemma probes deeper into her own psyche, seeking to find out how far she can go to prove her love & trust for Jason. He seems to be a devious sort, always planning & scheming to come up with new ways for Gem to prove herself, because that’s how he is turned on, by how she behaves and reacts. He is always aware of her needs & never really harms her, but some of the scenes are not for the faint of heart.

Although there are other books in this series, this one does stand alone, & has a HEA ending, with no cliffhanger, for which I’m grateful.

If you are a fan of the 50 Shades phenomenon, here’s another for you

“I want to swim,” stated Gemma as they moved away from the Spanish coast towards Africa.

Jason put down the binoculars. “That should be, may I go for a swim, and no, you may not. You can go below and take off your clothes. Wait for me in my stateroom in a suitable pose, something that will please me. I have expectations.”

He changed the inflection in his voice—easy to do—as if he triggered an internal switch. Her backgammon buddy and tour guide had gone; her master had returned.

Gemma hesitated long enough for him to fold his arms across his chest and give her a hard blue stare. Why did she risk annoying him? The wind caught the hem of her dress, and her firm breasts lifted as she inhaled.

While she had explained the rules of backgammon, he had listened attentively and given her a smile of appreciation. Since he had beaten her at that game, he had wanted her beneath him, playing another.

He beheld her gorgeous figure attired in a skimpy summer dress, braless, hair flowing in the breeze. Her skin slowly tanning even after one day and her green eyes dazzling. Jason formulated plans for her delightful mammary glands. In the evening, off the coast of Africa, he would surprise her.

As they’d sailed past the Rock, his own hardness had become rock-like. Standing behind her, as she had leant over the railing watching the waves below, he had wanted to lift her dress and penetrate her flesh there and then. However, he had promised to show her the best sights, and he had to wait for them to pass Gibraltar.

With the sightseeing opportunity over and the afternoon drawing to a close, for the first time since they had boarded Sublime, he intended to play with her fully.

He moved a fraction towards her, and her seconds of hesitation were over. She left and headed down to the stateroom.

For an extended excerpt – CHAPTER ONE – fingers

I just love the dynamic of Gemma and Jason’s relationship. It takes me places that I haven’t thought to explore, and in all reality probably never will, but I can live it through Gemma! There are times when I want to shout out and tell her not to act so stupidly and there are other times when I admire her restraint.
For a woman living a privileged life with such a rich husband she also experiences recognisable real life emotions with the usual ups and downs.
I love this series and look forward to even more.

This is the second book in Jaye Peaches’s Sublime Trust series. Jason and Gemma are back and they have some major life changes on the way! Gemma is having a hard time coping with everything, so Jason suggests she give up more control in their everyday life. The couple has always had a D/s relationship, but it had never been a 24/7 agreement. Jason hopes by taking their arrangement to the next level he can help his wife adjust to some of the things going on in their life. I really enjoyed watching Jason and Gemma’s relationship progress and an action-y subplot had me guessing and on the edge of my seat! This book has a little bit of everything but Jaye Peaches never strays too far from her main theme of the book which is Jason and Gemma’s deep, and somewhat complicated, love for each other.

Excerpt from Chapter One –

“Gem! Gemma!” His voice inched into her preoccupied brain. “You stopped sucking ages ago. Where are you?”

Jason lifted her head off his semi-erect cock. Her drooling mouth was open and in position, but not active enough for him. She sighed and flopped onto her side next to his languishing form.

“Sorry. Miles away.” She rubbed her bleary eyes with her fingers, ashamed of her lack of attention.

“I guessed that much. Where? Still on Sublime? You need to disembark, darling: mentally and physically.”

She couldn’t adapt to the cooler air and goose bumps rose over her skin. He covered her with a sheet.

“No. Not there. Work, of all things. I read e-mails all yesterday afternoon, while you did yours. Wish I hadn’t.”

While she struggles to accept her extra-ordinary marriage, her billionaire husband must deal with troublesome siblings and problems at work.

Just as she achieves her ambitions, a forgotten man re-appears. Gemma is about to discover the truth behind the memories haunting her.